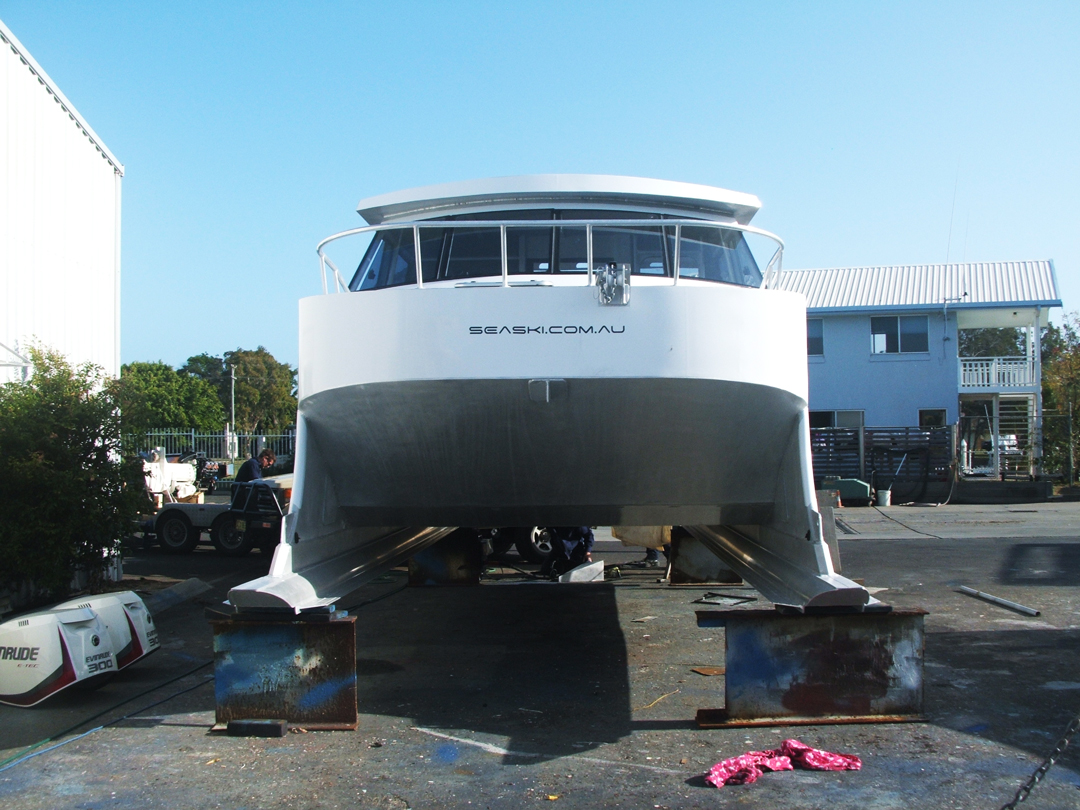 From the tried and true by the big boys to the innovative of the backyard boat boffin, it’s all on show at this weekend’s Gold Coast marine expo.

Trevor Payne is super excited about the Gold Coast International Marine Expo – he gets to unveil his “radical” new small craft to the public. It’s part of what the fourth instalment of the giant local boat show is all about – an opportunity for dogged inventors and marine enthusiasts like Payne to show their wares and rub shoulders alongside established boat building firms and other specialists. Payne has spent the past 10 years and a fair dollop of his own cash to develop and test what he calls the SeaSki, a cross between a hovercraft, hydrofoil and a catamaran.

The work-in-progress, moored at Biggera Waters in a berth of one of his company directors, has been in testing just last week. The Chinderah inventor admits there’s still plenty of tweaks and modifications required but he’s looking forward to showcasing it too. “(The expo showing) will be the highlight of the decade for me,” Payne tells Coast Weekend. “It’s certainly not a boat that will be everything to everybody. It won’t take over the world, but it will have its own area of value and that’s where it should be. “I think it’s a boat that’s going to develop its own market.”

Payne’s intentions with developing the seven-metre long Sea Ski are to come up with a boat that doesn’t lose speed in choppy conditions and can clear out of danger zones or pending storms quickly. “The whole idea is that most boats are what you call slugs, they can’t go too quickly in poor conditions. What happens is a boat might be capable of doing 50km/h and ends up down at 30, and if it’s really bad, may be 15. “It raises issues of safety and getting out of danger areas and situations where you might be getting a storm coming in and people are isolated, and it can become life-threatening.

The idea of the Sea Ski is it’s meant to be a boat that can manage particularly rough conditions and still maintain very high speed.” Payne, who believes it has applications for defence forces, customs and border security services plus leisure operators such as dive companies, has managed to secure a $96,000 Federal Government grant or development, which required matching from investors. Payne and his supporters held a testing day near Yamba last week which he says involved some “good outcomes” but also found light to a few issues that need solutions. “We had it up to 75km/h, not dramatically fast, but for a boat like that, moving on the Clarence River … I was happy. “We have a few issues to deal with, won’t be able to deal with them before the boat show. “We have to put pads under the bow to protect the underboard engines — at high-speed water travel up the legs of the underboard and so we had issues with that and need to build pads underneath. “We’re hoping once we’re at the boat show, we get enough interest from people to take it out on demonstrations. We don’t have anyone to sign up to purchase the boat but we’ve had a lot of commercial interest from people involved in water taxis.”

View the original article from the Gold Coast Bulletin