The NZ Herald – Aussie keen to show off skimmer

18 Jun The NZ Herald – Aussie keen to show off skimmer 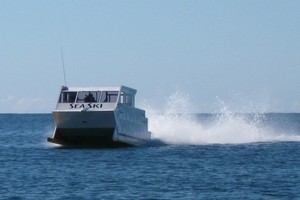 Kiwis like to joke that our Australian cousins don’t actually invent anything, they just steal it from us and claim it as their own.

But it’s hard to see much Kiwi input in the latest Aussie innovation, and what little there is dates back almost a century.

The invention in question is the Sea Ski, a power catamaran that sits on a set of skis.

The brainchild of designer Trevor Payne, it is really nothing like its 100-year-old predecessor.

Payne describes that early version as a “ski-assisted” speedboat. He discovered it after profiling his Sea Ski on an online forum for boat designers.

“I would say the designer, like me, struggled tremendously against the entrenched thinking of the time,” Payne says. “He had to find all his own funds and also build himself his proof of concept.”

That early designer’s craft, Rival, appears in Harold Kidd and Robin Elliot’s excellent book Vintage New Zealand Launches, a Winkleman Portfolio. It was said to have achieved 22.87 knots from a Model K 572cu in Scripps 111 engine, a very impressive speed for that era.

“The advantages I have enjoyed are very fast and powerful outboard motors, lightweight aluminium materials and a comprehensive understanding of the principles of ‘heavier than air’ flight. (The Wrights only took to the air 13 years before his endeavours.)

“But he was well in advance of his time all the same.”

Payne could also be well ahead of his time. Experienced Australian marine writer and Powerboat-World.com editor Bob Wonders recently took the Sea Ski prototype for a spin. Not one overly given to hyperbole, Wonders had no hesitation in hailing the Sea Ski as “definitely revolutionary”.

Payne comes from a small town called Chinderah, on the banks of New South Wales’ Tweed River. In true Australian fashion, he is not shy about promoting his beliefs and says: “The Sea Ski has radically redefined the capabilities of small craft in all sea conditions.”

Payne has installed full-length “skis” beneath each of his catamaran’s sponsons and put full-length running strakes on each ski. This takes advantage of an aviation “trick” that uses speed to generate an effect aircraft pilots refer to as the WIG (wing-in-ground) experience.

“This is created by a cushion of air, essentially between the ground and the wings of a landing aircraft and it offers more lift to the aircraft at slowing-down speeds.

“Consequently, when the Sea Ski achieves that same WIG effect, it is actually floating on a cushion of air. This allows the Sea Ski to virtually float across wave troughs as they open beneath the hull.”

Payne says the leading edges of the skis also have wave-piercing attributes.

He believes the design can best be described as a “high-performance sea skimmer”, able to maintain high speeds in seas that would force other craft to slow down.

The hull between the sponsons is perfectly flat to help compress the air trapped below.

“The Sea Ski owes a large part of its operation to this ‘air factor’. This is the amount of air that can be compressed under the large expanse of the flat-bottomed hull, Payne says.

“The faster one travels the more compressed air in the trapping zone and the less weight on the skis – consequently, the less load on the [outboard] power supply.”

Other advantages include stability at rest, the ability to operate in shallow water and excellent fuel consumption. Payne’s Sea Ski – powered by a Mercury 225hp outboard on a jacking plate – has been clocked at an impressive cruising speed of 50 knots. He expects his large 9m production model to also cruise at such a speed and have a top speed of 65 knots.

Bob Wonders, as one of the few to have taken the Sea Ski for a ride, says that describing its feel as “different” would be an understatement.

He says that in a brisk crosswind the boat felt almost “skittish”, although Payne assured him that, in more stable conditions, the boat runs as though on rails.

Wonders soon learned not to slow down in a hurry. “Decelerate quickly and you’ll almost go through the windscreen as the skis dig in and bring the boat to a stop as though a brake was applied.”

He was also quick to point out that this was in no way a boat ready for the market: “It’s strictly a prototype at this stage and will no doubt be subject to further fine tuning or tweaking.” Payne, however, is well advanced in his planning for the production model. He expects the 9m version to come complete with twin 300hp four-litre Suzuki outboards, “the space and refinements found in most 33ft to 36ft mono and catamaran hulls”, and a pricetag of A$275,000 ($360,000).

Payne is not a boatbuilder and says his role will be in management, marketing and quality control. He has given the manufacturing rights to Harwood Marine International.

Payne believes that one of the key advantages he has achieved with his design is simplicity. “There are no moving parts, no electronics or anything involved that might be termed ‘high-tech’ and expensive.”

Wonders says that Payne is not without his detractors.

Nevertheless, there is no denying he has created something very different and, in Harwood Marine International, has a partner with an impressive world-class reputation.

Found on The New Zealand Herald